It is most crucial to know about DHT as, being a culprit, it is majorly associated with baldness or male pattern alopecia. Hormones have a prominent role in hair loss and now it’s the time to go into more details.

All chemicals in your body including your hormones are created by enzymes. Enzymes are small molecules of proteins that act as catalysts to create chemical reactions throughout the body.

When enzymes interact with the chemicals throughout the hormones, they trigger several reactions. First, they energize the hormones to indicate the functions of your body.

For example, enzymes interact with growth hormones and begin the healing process when you have a wound. Second, they relate to hormones and cause them to be metabolized in their final state.

When it comes to hair loss, the most interesting type of enzymes are those that metabolize steroids and specifically the enzyme 5 alpha-reductase, or 5α-reductase. This class of enzymes metabolizes steroid hormones, such as androgens and estrogens. These enzymes are produced in the reproductive organs and skin as well.

5AR is most commonly produced in the sebaceous glands in the skin, including the scalp.

Usually, men and women have a wide variety of enzymes that metabolize steroids. All these enzymes work to improve or limit one another to maintain a healthy balance of hormones in your body. However, each enzyme has a very different job.

Some enzymes, including 5a-reductase, convert androgens into more effective forms. For example, the main function of 5a-reductase is to convert testosterone into a three to ten times more optimized, more potent version called dihydrotestosterone or DHT.

Unbalanced 5AR Against Other Enzymes

In the cases of androgenic alopecia (male pattern baldness), it has become clear that both genders have an imbalance of these enzymes. In fact, they are exactly the same enzymes, both in men and women which are the main culprit. All who suffer from androgenic alopecia have a surplus of 5a-reductase that converts testosterone to DHT.

Scientists realized 5a-reductase while doing research on the theory that baldness is caused by family history and genetics. It was found that families with hair so thick that lasted up to 80 years or more had very low levels of 5a-reductase but maintained healthy levels of the other enzymes of their class.

On the other hand, families with a high incidence of hair loss and baldness, especially prematurely, had extremely high concentrations of 5α-reductase. They also had very low amounts of the other enzymes in their class, such as those that should convert a part of testosterone to estrogen and those that metabolize androgens. Essentially, the genetic tendency was not to lose hair but to produce more of the enzyme 5a-reductase which in turn, responsible for converting testosterone and producing the enzymes to counteract it.

Knowing that your body needs a careful balance of all enzymes to improve and counteract the role of 5α-reductase, what do you think will happen then if there is an imbalance?

The answer to that question is DHT-dihydrotestosterone. Having excess 5a-reductase in the system means that you can also have an excess of DHT in the system. There is nothing to counteract DHT Without enough enzymes to metabolize steroids in your system. Then, you will have an increasingly powerful uninhibited DHT.

DHT has myriads of benefits as its primary function is to produce muscles, mainly in men, also in women but to a lesser degree. Women really have no other use for DHT, but in men the body also uses DHT to produce facial and chest hair and have a deep masculine voice. DHT is also considered the stimulus for aggressive behavior in both sexes, but especially in men.

Because the DHT is so concentrated, you really only need a small amount of it to perform all these functions. The rest of the DHT in the system must be metabolized fairly quickly by other enzymes. DHT never stays in the body of a person with a healthy hormone and enzyme balance.

It's likely you've always had a tendency to increase 5α-reductase, resulting in DHT in your system. When you were younger, the symptoms of an excess of DHT may have manifested as acne, facial hair appearance, and fickle mindedness from time to time. At that age, DHT was appeased by natural energy and increased the productivity of the growing body.

Entire maturity and puberty consume a lot of testosterone. The natural tendency of DHT is to be active and burns a lot of fat and builds your muscles for growth, which keeps the DHT even more at bay. In addition, your growing body can not stop increasing all kinds of enzymes, including those that balance and counteract DHT. All these things make you a mature adult.

In your 20's you can stay very active, which helps combat DHT, but your body is at or near the end of its growth at some point of time and things are about to slow down. At some point, your metabolism is going to be slower and slower. You will stop adding muscle naturally and the only muscle growth that will occur will be rebuilding through a muscle injury or one that is created through the exercise with weights. The spectrum of enzymes that once counteracted 5α-reductase will be reduced.

As we have seen previously, even in adulthood your body still requires testosterone. However, your rapid growth is no longer acting against your use of testosterone or raising your levels of non-5AR enzymes. Sooner or later (and most of the time early) your genetic tendency to increase the 5AR will start to bill you. As soon as you start increasing the 5AR, the increase in DHT and the attack on your hair will begin.

The more frequently 5α-reductase produces, the greater your body will produce DHT. As the cycle repeats, the excess DHT is increasing and your body must store it somewhere. The body of men can store a small amount of DHT in the prostate.

However, both men and women store the majority of DHT in the place that the body considers most logical and efficient. They store the powerful hormone where it was created, its skin. From all skin, the scalp is the thinnest, easiest, and lowest priority place for storage, so that almost all of the excess DHT ends up in the scalp.

Let's have a look at this image that describes the overall process: 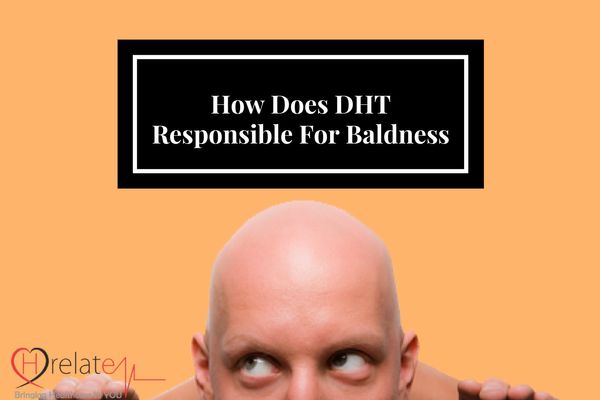 In the previous article, we learned how hair grows and the basic concepts of androgens with hair anatomy. There are hormone receptors (androgens) infused throughout your scalp. Likewise, most 5α-reductase is being created

Originally, Minoxidil was marketed in tablets and used exclusively in hypertensive patients. Being a vasodilator, it has an excellent response in this type of pathologies. The action of Minoxidil against hair loss was

Healthy Lives
—
How Does DHT Responsible For Baldness (Androgenic Alopecia): Part 1
Share this